I recently finished watching TCM's seven part documentary, "Moguls and Movie Stars: A History of Hollywood," which traces the history of the film industry from its earliest days all the way up to the final fade out of the mogul era in the late 1960's.

While it didn't really cover any new ground, it did provide a great overall look at the evolution of the industry, and the unique personalities that built the early industry.  These pioneers - from Louis B. Mayer to the Warner Brothers, to Darryl Zanuck - not only invented (and continuously reinvented) the movie industry, but achieved success with pure tenacity.  That may sound somewhat cliche these days, but these guys (and women, the program illustrates) really did it.

For me, the most fascinating part of the program is the earliest episode, "Peepshow Pioneers"which looks at the industry in its very earliest days, from 1889 - 1907, when peepshows - those machines that individuals would peer into to view 10 or 20 second short films - became the craze.  The program reports that Thomas Edison's  studio (really, the first of its kind) produced close to a thousand of these short films in a single year.  In the beginning, these films consisted primarily of simple improvisational skits created by Edison's studio workers themselves.

I can't help think of parallels to the social media / YouTube world today, where so many are experimenting with a form of expression which is both an evolution of motion pictures, and it's own unique creation.  Of course, in those early days, a single man, Thomas Edison, who invented (or perfected) much of the technology that made the birth of the industry possible, and tried to hold onto a monopoly in the creation and distribution of content.  Today, media creation is open to all, and there are limitless variations on creating YouTube content - some for nothing more than self-expression, and others as entrepreneurial ventures.

The film industry wasn't invented by individuals from the theater world - it was created by people from unrelated worlds - or dirt poor kids  -  who created an opportunity that others may have ignored in their own sophistication.   If the social media platform does evolve, the driving forces that make it stand on its own will not, ultimately come from the existing media industries - but from the individuals who are creating audiences where none existed.

I suspect that most, if not all of the top YouTubers are individuals without filmmaking backgrounds.  Even though I'm a filmmaker, I love the subversive irony...
Posted by Rickflix at 10:50 AM 1 comments


In this vlog, I celebrate the debut of my documentary by comparing big studio films with my modest little film....
Posted by Rickflix at 9:03 PM 0 comments

Who Are Our Own? Defining the 'Industry' in the Age of Social Media

After I posted my recent blog on the Motion Picture and Television Fund, I received several comments on the fight to keep open the long-term care facility, which I mentioned only in passing, but which is a particularly intense and impassioned battle, sparked by the feeling that the Fund wasn't living up its charter that, in the entertainment industry, "we take care of our own."  The battle is still raging (for more information on what this is all about, check out http://www.savingthelivesofourown.org), though I believe that a critical question in a fractured and platform diverse entertainment industry may now be, "who are our own?"

Where once recorded entertainment was dominated by a precious few studio entities, the world today encompasses a wider world of craftspeople serving not only the studio and television industry, but the developing new/social media platforms that are continuing the tradition.   Independents and contractors far outnumber full-time staff, and the economic and technological realities of society and this industry have forever changed the employment landscape.

So, who are "we?" What is the entertainment industry community today, as far as traditional organizations like the Motion Picture and Television Fund?  I wonder if the benefit and power of a being a cohesive like-minded community of (as opposed to the media industry itself), is being harnessed to it's greatest advantage.  Is the potential base actually much wider than ever before, but lacking simple awareness of their common interests?  Are the traditional protective/non-profit interests even considering what some call "Digital Hollywood?"  Does "Digital Hollywood" even recognize their place in the entertainment industry "community?" Who do they consider "their own?"  And, who are "they," anyway?  - Are "they" one of "us?"

Is there a potential power base somewhere in all of this confusion?
Posted by Rickflix at 11:08 PM 1 comments

I just took a survey submitted by the Motion Picture and Television Fund, a charitable organization that has looked after the health and welfare of individuals in the entertainment industry for 89 years.  It's an organization that encompasses a wide variety of services for industry members of all ages.  My father, throughout his industry career, took regular payroll deductions to contribute to the Fund.

Yet, as long-standing and respectable as the Fund has been (not withstanding some recent controversies), it's remained somewhat below the radar for most industry people.    In fact, after I took the survey, I wrote an email to the Fund, suggesting they include in their new outreach efforts a better definition of just what they actually do for industry veterans (i.e. retirees).   As the saying goes, "I wish I knew then what I know now."  In simply providing guidance, it seems that their extensive services could prove invaluable on so many levels - I know our family could have benefited from their help as my father's health failed - if only we had known.

Though the Fund hasn't employed social media as yet (judging by the website) - it seems that today, even with the volume of information that bombards us every day, service organizations like this would find social media particularly useful, if only to raise their awareness among their supporters.  Additionally, a few weeks ago, Kenrg called my attention to a new website, http://www.jumo.com , which is somewhat of a Facebook-type site for following your favorite non-profits.  I'm not entirely certain whether that's a workable solution for most people (after all, it's another site to track), but I think it a worthwhile step in developing awareness among important non-profits about the critical importance of reaching out through social media.
Posted by Rickflix at 7:40 PM 5 comments 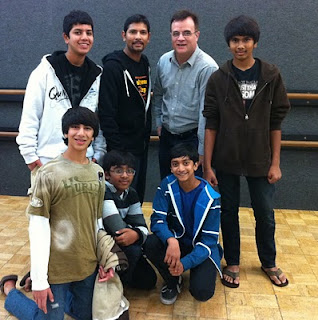 This past Sunday, I had a small screening for the subjects of my documentary, "Bollywood Steps," the story of transplanted Bollywood choreographer Yogen and the young American-born Indian boys who were some of his first students.

One of the challenges and responsibilities of creating a film like this is developing the trust of the people involved, and then (at least in the way I try to do things) creating a documentary that's respectful of that trust.  This private screening was the first time since I began the project in late 2007 that the families have had a chance to see the finished program.  Naturally, I was a bit anxious about the evening.  I knew they wouldn't find the film objectionable - it's a film with a solid, positive message.

However, even though it's a small film - i.e. it likely won't be seen by millions - it's still, to some extent, preserving and creating a legacy of certain people at a certain time in their lives - through my own interpretation.  Perhaps that seems a bit "deep" for a documentary project like this, but I've spent three years living, working and thinking about the people in my documentary.  It's not a relationship, of course.  Perhaps it's more of a heightened awareness that best defines my connection with my "Bollywood Steps" subjects -  added responsibility borne out of familiarity.

Sometimes, filmmaking is a strange process.
Posted by Rickflix at 10:17 PM 0 comments