How NOT to Handle Trolls

Part of the fun of writing—and I hope, reading— Own the Scrawny and My Life at the Bottom of the Food Chain is delving deep into the mind of Alexander. His predicaments aren't so much a result of what happens to him, but his skewed perception of reality. 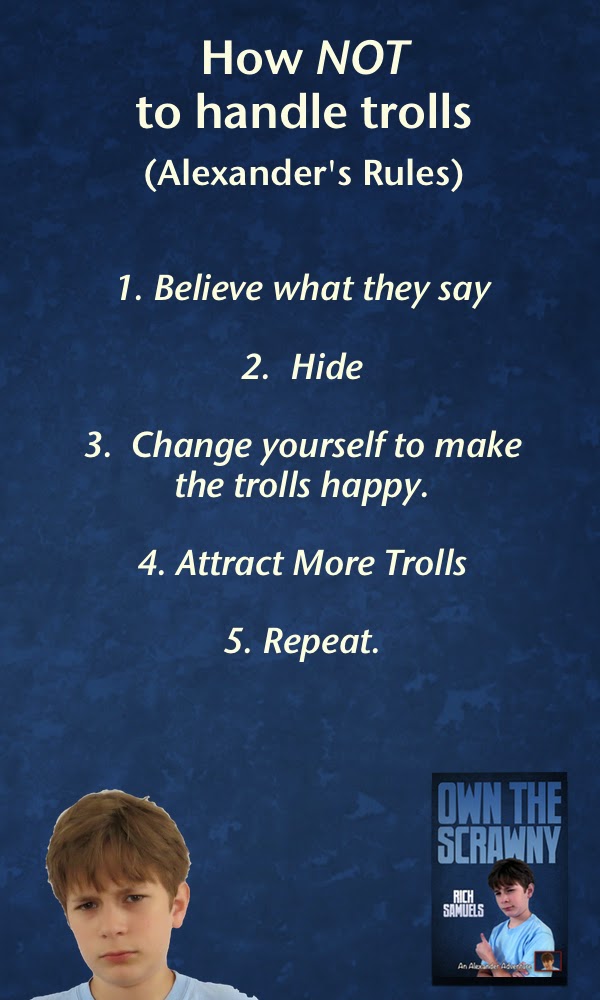 In Food Chain, he's convinced that he's prey in a sea of predators, living his life in constant fear until he decides to confront an innocent boy he imagines is the greatest bully of all.


In Own the Scrawny, Alexander's the unwilling star of an embarrassing viral video. Worse yet, he discovers that he's the target of online trolls, whose incessant ridicule in the video's comments section fills him with self-doubt. Instead of ignoring them, he decides that he needs to prove them wrong, and sets in motion a series of events that makes things much worse. He tries acting differently (fail); he tries dressing differently (fail); and even tries avoiding everyone and everything (fail again!).

Trolls insult, demean, destruct and degrade others through their comments, often hiding behind anonymous profiles. They don't often know their targets, and in fact may simply be reposting the same words over and over again. Instead of ignoring them (usually a good first step), Alexander cares about what they say.

The internet is filled with anti-troll strategies - I've collected some of them here on Pinterest. They generally suggest a few basic points:

Alexander takes a few detours before getting there, but eventually learns, as we all do, to keep the troll where he belongs, hidden and forgotten under the bridge.

Posted by Rickflix at 6:20 PM 1 comments

Email ThisBlogThis!Share to TwitterShare to FacebookShare to Pinterest
Labels: book, my life at the bottom of the food chain, own the scrawny, trolling, writing

Trolling: What's in the comments? 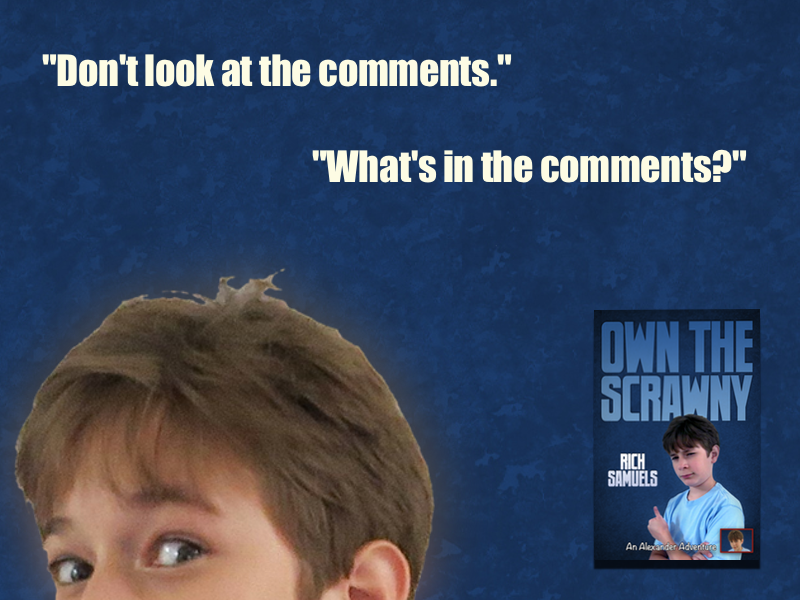 In my new book, Own the Scrawny, thirteen year-old Alexander becomes the target of online trolls after a brief, embarrassing moment in school becomes a viral video.

Suddenly, millions can view his humiliation, and thousands are posting their ridicule, Some say he's weird, odd, or a loser; others are more threatening, and wonder if he can possibly be real.  With so many people saying such horrible things, Alexander's sure of just one thing: he’s got to prove them wrong.

Wikipedia describes a troll as “a person who sows discord on the Internet by starting arguments or upsetting people, by posting inflammatory, extraneous, or off-topic messages in an online community.” While cyber-bullying has come to represent the extension of traditional bullying into every aspect of a victim’s life, trolls can be anyone and anywhere.


Own the Scrawny is all about perspective. Alexander faces adversity just as he did in My Life at the Bottom of the Food Chain - with absolute panic. He becomes obsessed with the opinions of strangers, and tries desperately to transform himself to please people he doesn’t know. He forgets, at first, that the people closest to him—friends and family—accept him as-is. Trolls aren’t worth a second thought.

Twelve year old YouTuber DrewDudeTv (for privacy reasons, we won’t use his real name), who portrays Alexander on the cover of Own the Scrawny, shares that “I’ve had a couple of people tell me to go kill myself” simply for making funny videos, and repeatedly taunting him by asking, “Why haven’t you killed yourself yet?”  Thankfully, Drew has strong family support, tech savvy parents, and older brothers with YouTube experience, so he knows not to believe the haters. Some kids don't have that advantage.

DrewDudeTV’s sixteen year old brother, known on YouTube as Fur, has faced his own trolls, and found “if you actually go to their channel, you see that they literally just copy and paste that same exact comment on a hundred different videos. They don’t even watch your video, so you can’t even take it personally. These people just generically go around spreading hate, that’s just what they do.”

In my next blog, we'll look at some of the popular approaches to dealing with Trolls. In the meantime, you might want to check out my "What's Trolling?" board on Pinterest:

Posted by Rickflix at 8:22 PM 0 comments