Climbing Up From the Bottom of the Food Chain

[Update:  Within ninety minutes of posting this blog, I received a response from an inquiry I had made a couple of months back.  In September, I'll be interviewed on the most high profile book review program here in Los Angeles - this is an incredible opportunity.  Here's the interview as it appeared a month later]

In April, the e-book of “My Life at the Bottom of the Food Chain” (my official website here)  became available on the major sites.  In June, the paperback edition was released, and is now available on most on-line sites.  How has the “roll-out” of my book progressed so far?

A number of readers have shared photos of themselves with the book, and, and as fun way of keeping in contact with my readers, I have shared photographs of my book in locations as varied as Morro Bay, California and London, England. 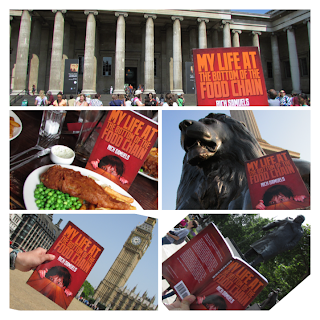 My greatest challenge remains getting the word out.  All of the public reviews and ratings are helping to build a good base for the book moving forward, providing some legitimacy as people search for the title…

People have to search for it first.

I need to generate publicity.  I need to build on the themes addressed in the book.  Reviews have been enormously helpful in developing a wider idea of just how people perceive the story and Alexander, the main character – and how this book contributes to wider discussions.  One on Goodreads, for example, indicated that the book “could potentially show kids how to be a good friend to someone who isn't exactly easy to be friends with.”

I need to encourage more reviews across various platforms – blogs, book sites, YouTube, podcasts.  These all those up in title searches, and help build awareness.  At this early stage, when the volume of readers isn’t very high, that can sometimes be a tough challenge.  Most people (including myself) don’t regularly write reviews – even if they like a book or product.   For an independent author like myself, however, those reviews are golden.  I’d also like to identify and encourage young YouTubers (as well other content creators) who might be interested in creating reviews or other videos.  (Contact me via this page if any of this interests you)

I’m also hoping to for feature stories and interviews related to the story behind the story – and the issues the book addresses.  Without an agent to handle publicity, it’s a bit tricky to conceptualize and promote press opportunities for myself, but it’s critical to my goal of connecting the book to as wide an audience as I believe it can reach.

One of the most positive messages I’m getting from reviews and other reactions is the fact that most readers express their personal feelings about Alexander.  He’s generated a wide range of emotions, from understanding to frustration to anger. Some have expressed a fondness for Alexander, while others have said that he was so frustrating, “I’d love to slap him.”  These all feel like authentic feelings and responses to a person, rather than a character.   Generating an emotional response is a great reward.

I need to write more on the themes discussed in the book, on blogs and other sites, to further develop my credentials and awareness moving forward.  My intention has always been to move forward with my writing pursuits.  “My Life at the Bottom of the Food Chain” was never attended to be a “one-off,” speaking both of the characters and of my writing pursuits.

There are hundreds of thousands of authors pushing their wares across the internet. I recognize that I’m just one of many and I have my work cut out for me.  I’m fascinated with the challenge, and I see it as an ongoing part of a process I’ve been pursing of embracing the challenge of creating and marketing online media.

I’ve written blogs, created hundreds of YouTube videos and experimented with social media – only to find myself, as a direct result of the experience, embracing my earliest ambition.

Your feedback and suggestions are always welcome!

Posted by Rickflix at 2:37 PM 0 comments

Email ThisBlogThis!Share to TwitterShare to FacebookShare to Pinterest
Labels: my life at the bottom of the food chain, rich samuels
Newer Posts Older Posts Home
Subscribe to: Posts (Atom)