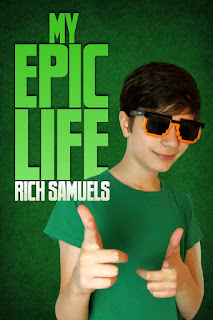 Here it is! The cover of the third book in my Alexander series, about one boy's bumpy transition from kid to teenager. 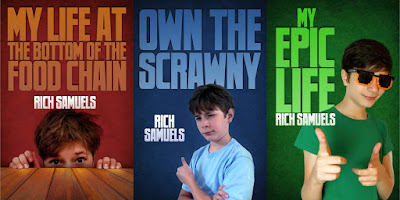 I wanted to reveal the cover for "My Epic Life" side by side with my first two books - I LOVE how they tell Alexander's story. In "My Life at the Bottom of the Food Chain," Alexander was scared of the world around him. In "Own the Scrawny," he was searching for an identity. In "My Epic Life," our quirky hero discovers that his greatest strength is in being himself.

"My Epic Life" is the first story in the series told in Alexander's own words—because only he can tell this story. His entire world is shifting.  Suddenly, friendships old and new have become complicated, something very puzzling is going on in his relationship with Ellen, and he's forced to accept that his clothes aren't randomly shrinking—he's the one that's changing...

...and if you've read the first two books, you know one thing: Alexander doesn't deal well with change!

I'll be announcing the early 2016 release date soon. Like the first two books, it will be available in ebook and paperback - and later as an audiobook.

For the latest on this book series and to take part in our Advance Reader Program, please sign up for the newsletter:
Posted by Rickflix at 7:36 PM 0 comments

Email ThisBlogThis!Share to TwitterShare to FacebookShare to Pinterest
Labels: books, indie author, my life at the bottom of the food chain
Newer Posts Older Posts Home
Subscribe to: Posts (Atom)