Recently I spent a couple of days at the Los Angeles Convention Center, enjoying the sites, sounds, and creative energy of the emerging Virtual Reality industry. I sampled new worlds and met extraordinary people.

I listened to industry leaders both inspire and caution entrepreneurs about the future of the VR platform. John Riccitiello, the CEO of the ubiquitous Unity game development platform, believes that the industry will continue to progress, but won't reach massive acceptance for a few years yet. Pie-in-the-sky predictions aside, he believes it will be a few yet until true VR tech will be in the hands of one hundred million users and the industry can be considered well-established.

At the same time, excitement was palpable, and proof of the technology was everywhere.

Applications varied wildly. Here's just some of what I was doing at VRLA:

Floated inside and outside a meticulously detailed recreation of the International Space Station, produced with the involvement of NASA.  https://www.oculus.com/experiences/rift/1178419975552187/

All were great experiences, and show just a hint of the wonders that VR will hold in store in the coming years.  The VR industry is moving lightning fast, and many of the companies and projects on the exhibition floor didn't exist a year ago.  Of course, perhaps half of those companies or more may not be around in another year, but that's the reality of any new venture...high risk, for the potential of a high reward.


The technology is real. Unlike the recent launch and crash of 3DTV, VR has something valuable to offer gamers, educators and even bed-ridden patients in hospitals. It's just a matter of time.

At the moment, VR tech is still expensive and somewhat complicated for most consumers, but that's rapidly improving. Most haven't experienced any sort of VR, and most of those who have, experience it through cardboard viewers (into which one inserts a smartphone). Personal experience has shown me that people don't "get it" until they've tried it.

While I'm impressed by the tech, the industry and the VR experiences, I'm fascinated by the people that are making this all happen—the coders, content creators, writers and entrepreneurs who by necessity have had to think outside the box—because the box doesn't exist.

Posted by Rickflix at 5:10 PM 0 comments

A few weeks ago, I wrote here about my experience using the Tap app on my iPhone, in which stories are told entirely in the form of text messages. As you may recall, I tried it out, wrote a couple of stories, and then decided that the pricing structure wasn't to my liking, and decided to move on the sister app, Wattpad, a long established creative writing destination. I actually like the app itself, but doubted it viability as a successful venture.

Yesterday, Tap was brought to my attention when I received an email from the Tap offices, asking to feature one of my stories on their front page. I agreed. It hasn't happened yet, but it drove me back to the app to check on the fate of my stories.

Played, the story Tap wants to feature, doesn't have too many views - it hasn't grown much in several weeks. The other story, The Prank, which is based on characters in my book, My Life at the Bottom of the Food Chain, is trending upward, with over 145,000 "taps" and rising. I'm not certain precisely how that translates into individual readers, but the number is growing daily and my "friends" list is expanding rapidly (it had been entirely empty at last glance).

I'm still not convinced about the pricing scheme, but I have to admit that the growth in my Tap account is fascinating. I'm curious what will happen when/if my story is featured, and I've decided to create an additional story or two and see what happens. I still wish I could share the stories more freely, as I do on Wattpad. but for the time being I'll give it a go and see what happens.

I also have a suspicion that The Prank may have cross promoted my Alexander books (and sold a few copies). If it gains more readers, will I see a spike in book sales? Very interesting...

At the very least, I don't want to disappoint my new friends!

Author Update (aka what am I doing?) 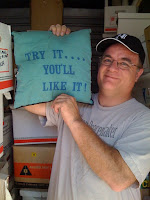 Here's what's going on in the world of Rich Samuels (Author Edition):

SoupChad is a tale in the spirit of my Alexander books. It's a story about a boy who loves soup, and had no patience for kids who like salad. If you've ready my books, you know how much I enjoy obsessive characters. Chad fits right in. You also might find this to be an allegory...

Feeder is part zombie tale / part vampire tale / part experiment in creepiness. This is probably the most experimental of all the stories I've posted so far. What do you think?

Marcus on the Train (as well as Soupchad) is a thriller I've been tooling around with for quite a long time. This one is about a teen runaway whose unwanted companion is proving to be more than a little unbalanced.

Offline, I'm working on a couple of novels that I'm not quite ready to talk about yet. One is a science fiction tale, and the other a thriller/mystery. I'm hoping to have one or both available next year...I hope to share more soon!

Posted by Rickflix at 1:54 PM 0 comments