First, thanks to all of you who in the "real" world who have mentioned reading my article here on my father - it's good to know that you're out there! 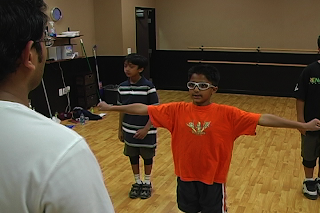 I'm finally approaching the release of "Bollywood Steps," my documentary about American-born Indian boys learning to connect with their heritage through Bollywood Dance, and their bond with Bollywood choreographer Yogen Bhagat.  Following the spirit of the film, which I wrote, produced, shot (mostly), and edited, I've intended for some time to distribute the film myself, as well.  In fact, that's the original motivation for my exploration through social media.

I'm very curious - excited, and a bit anxious about how all of this will come together - the people, the social media activity - and the practical results.  To be somewhat anti-social about it - It's an entirely new business model.

FYI - "Bollywood Steps" will initially be available early next year on Amazon.com and affiliated sites.

As I continue my journey through my various social media outlets, my "holy grail" is to reach the ease of expression that my mentors (you know who you are) have reached over years of full-fledged immersion into the social media world.   Reaching that elusive plane of existence is tricky though - I'm still trying to measure my effectiveness at creating informative content.

Numbers aren't as critical as engaged users - That was one of the first lessons I learned about creating in the social media world.  The second was understanding that this is a process that evolves over time.  I understand that, as well - though I have to admit that it's a challenge to create at times when my viewership seems stagnant.

My objective from the beginning of this process was to adapt these tools into my creative / career efforts. Over the past year, as my knowledge and experience in social media has evolved, I've realized that it can take a critical role going forward - and I'm puzzled with my associates who carefully remain "off the grid" as far as social media is concerned.  Even at this early stage, I can't miss the potential.  It seems short sighted to ignore it.

While I've created media for a living, creating effective social media is a completely different challenge - and one with which I'm still fascinated.  Most of the sort of work I've traditionally done is out the door and gone - there's rarely the sort of ongoing interaction that social media expression encourages.  I admire social media entrepreneurs who are incorporating the entire package - writing, producing, editing, distributing and promoting whatever they create.  It's subversive to traditional media - which interests me to no end!

I've always felt that the learning "social media" will one day seem archaic as learning the telephone, but speaking for myself, I know I'm not there yet.  I'm still wearing my noob hat!
Posted by Rickflix at 10:01 AM 1 comments

I've strayed a bit from my traditional social media related topics here, but allow me one more note on my previous blog about the so-called film historian who questioned my dad's integrity (and intelligence) in an article about film preservation.

In response to the previous blog, a former colleague of my father wrote:

The writer of the offending article, who presents himself as a film historian specializing in the technical history of Hollywood, claimed that my father had would would have been a first in studio management - the freedom to act exclusively and alone.

Just a final note - my ability to connect with my father's colleagues and former staff is a direct result of social media.  A couple of years ago, I posted my father's retirement speech on YouTube, and over time, his former associates discovered the video, and through it, discovered me.  We've been in contact ever since.  It's been a priceless opportunity to learn about my late father and his management style.

...and to respond to an historian with poor habits.  "Just sayin'"
Posted by Rickflix at 9:53 PM 0 comments 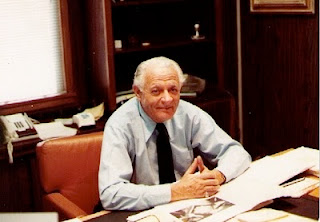 My father, Sid Samuels, Vice-President of Worldwide Services
at 20th Century Fox, just before his retirement in 1987

History, it's worth reminding ourselves, is created through the prism of the historian's life, experiences and personal sense of morality.


I was reminded of this fact the other day when I was poking around the internet and came across an article on motion picture industry history that happened to mention my late father.


Apparently, this "editor/historian," a man by the name of Rick Mitchell, was particularly unhappy with a decision my dad made in the 70's: "*I have also seen film-outs of 2K restorations of "DOWN ARGENTINE WAY" (1940) and "LEAVE HER TO HEAVEN" (1945), necessitated by Seventies moronic Fox executive Sid Samuels' decision to have all the company's nitrate three strip Technicolor negatives duplicated to CRI stock and the originals then destroyed!"


I realize this is all somewhat obscure for most people, but it boils down to this:  In the early days of the motion picture industry, film was printed on nitrate film stock - which was not only flammable, but unstable and prone to deterioration if not carefully preserved. As a result, many early works have been irrevocably damaged or entirely lost.  Studios, always focused on the bottom line (yes, even in the early days), rarely saw the value of preserving their old product.  Today, there are countless outlets for such product, and the film preservation movement is a healthy force in the film industry.  That wasn't the case throughout much of the 1970's.


For many years, Nitrate prints of many Fox films were kept right on the lot, in special fireproof vaults - but an investigation, as I recall, showed that many of those films were beginning to deteriorate.  My father headed a department which, among other things, was responsible for Fox's film library.  He was given the directive to save these films - but with little or no resources (as my father would later relate the story).  He did the best he could, I think, under the circumstances, making an informed decision based on (at the time) over thirty years of experience at Fox.  Naturally, as he noted many times, he couldn't please everyone - particularly those who could only speculate on the realities of working within the studio structure.


It won't surprise you that I wrote Mr. Mitchell an email, questioning his use of the word "moronic" in describing my father.  I also pointed out that my father was, in fact, appreciated for his positive contributions to film preservation.  I reminded him of the management structure under which my father worked.


To his credit, Mr. Mitchell apologized for calling my father "moronic," but at the same time offered a perspective that makes me wonder about the objectivity of this historian.  After mentioning that he worked at Universal during that period, "a studio whose executives were the most moronic to infest the industry to that time," he went on to insist that "every account I've heard, from several sources including one who was at Fox at the time and involved in post, blamed him exclusively for the decision." (his italics).


Mitchell, I believe, has completely ignored the realities of the corporate / studio world. I'm sure he would have preferred that my father sacrafice himself and his job to the sacred altar of film preservation, but his responsibility was to balance all of these concerns  and, at the same time, fulfill company policy.


Ultimately, my father had a forty-five year career with Fox, and to this day, 23 years after his retirement,  I still hear fond memories from his former colleagues and staff members.


Mr. Mitchell, history is made up of real individuals, not one-dimensional cardboard cut-outs.  You may not have liked the studio structure, but understanding it is key to understanding the truth about decisions and motivations made in that environment.
Posted by Rickflix at 5:21 PM 0 comments