Today, I'm launching an Indiegogo crowd funding campaign for my new documentary, "Life Online."  This is my largest step yet in putting social media to work for my life and career.  My blog, Twitter account, YouTube channel, Facebook page and the like have been around for a few years now.  Over the past year, I've had a great time interviewing YouTubers and other online entrepreneurs (and sharing those interviews on my YouTube channel). I've connected or re-connected with individuals around the world.  Like most who have jumped into social media, I've had a great time. 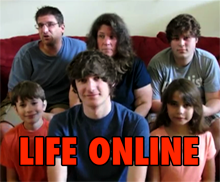 Now, though, the time has come to put these tools to work.  As someone who has worked in so-called "traditional" media most of his life, I've come to believe that the future - or, perhaps, the more exciting future - of this profession lies in the ability we  now have to directly reach an audience.

The democratization of media - increased access to creative tools and fewer "gatekeepers" - allows any individual with a computer (or smartphone) to be an entrepreneur.  The potential is enormous - but so are the challenges.  It still takes a leap of faith and the acceptance of risk  to take that step.

All of this brings me to today, and "Life Online," a documentary about a family dedicated to creating on YouTube and living through social media.  Mom and three sons have YouTube channels, and even dad and their youngest daughter are also involved. One son, 14 year-old "Fur," (it's short for Christopher), is even a YouTube partner and shares in the ad revenue on his channel.  I'm hoping to create a documentary asking the question, "What happens to a family life when there's an audience to serve?"

Crowd-funding sites have become enormously popular in the last couple of years.  Essentially, they allow anyone to donate to projects - from films to inventions to political causes - at levels that range form just a few dollars to thousands, in exchange for perks that can range from a Twitter shout-out to credit on the film    Using social media "word-of-mouth," popular projects can reach their goals and become reality to an extent never before possible.

I've wanted to try crowd funding for quite some time, but until now, I hadn't found the right project - one that not only had to potential to capture the imagination of potential funders, but also had the social media "legs" to spread far and wide and give me a fighting chance to succeed.  "Life Online" seems like a perfect opportunity for my Grand Experiment.

First, I'm telling a popular story.  Like it or not, social media has fundamentally changed the ways we interact.  YouTubers - those who share their lives online - are at the forefront of that change.  The fun, quirky family I'm profiling, I think, provides the perfect vehicle to explore what that change really means.

As "Life Online" tells a social media story, I'm betting that I may be able generate enough interest in the social media community to give me a fighting chance to get the film funded.  A number of individuals with their own network are helping me get the word out. Getting people to visit the IndieGoGo project page is the first challenge.  If I did my job right, some of those visitors will accept my pitch and be willing to help.

Will it work?  Starting today, I'll have just about two months to work at it and find out.  I'll let you know how it's going.
Posted by Rickflix at 3:56 PM 3 comments