You may have heard the term, Gig Economy, which generally refers to making a living on a job-by-job basis, rather than working for a single employer. It's become more and more common as time moves on, and it's caused more than a bit of anxiety as jobs with benefits and 401-K's become rarer and more difficult to land. The prospect of "pounding the pavement," looking for the next opportunity isn't that appealing in uncertain times. 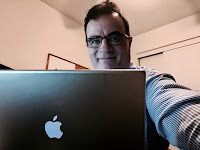 If you're a creative in 2017, however, pounding the pavement is at best an archaic concept. The gig economy, in my initial dive over the last 2-3 months, means expanding my prospects from a limited local focus to one that is international, and much wider in possibilities than it would be otherwise. It means that I'm creating a clientele beyond serving others in the media industry to businesses of all types and sizes, and offering a wider variety of services than ever before.

I'm primarily a video editor and writer by trade, which are both crafts uniquely suited to the gig economy. What makes this transition possible, in my case, are two of the most prominent sites in this new world: Upwork and Fiverr.

Fiverr, so called because it began as a resource to obtain creative work (from writing to computer programming to artistic work to video production and editing) for as little as five dollars. That was still my impression until relatively recently, in fact, until I learned that the name of the site had really become a shorthand for finding value at a suitable price. If set up correctly, an individual can set up opportunities that meet their existing rates, and on a more consistent basis. The seller offers a service, or "gig," with a number of add-on premium options, and a buyer needing a  service searches for a seller with the experience and price to complete the task at hand. The two come to an agreement, usually customizing a gig to suit the specific situation, and the work is completed in a set time.

Upwork allows buyers to post their specific needs.  Freelancers submit proposals with a suggested bid. The buyer chooses the freelancer best suited for their job.

In both cases, freelancers are paid through the sites, with a percentage subtracted as a service fee. That percentage can be fairly high (20 percent in some cases), but it's not unpredictable. Strategic freelancers will simply keep that fee in mind when setting an hourly rate or submitting a bid. The sites are upfront about this, clearly indicating the bid, the site's fee, and the resulting profit you will see from completing the service. For example, a completed task you accepted for $100 on Upwork will net you $80, with $20 going to the site.

Succeeding in the gig economy, though, takes some hard work and careful strategy. I'll take you along on my initial experiences in part two of this series, as I work to develop and build my online reputation. I'll show you how I began and update my progress as the story unfolds.

I'm just starting my journey, but I can already see the life-changing potential.