My somewhat anxious vlog...announcing my book!  It took me forever to sit down and do this - Somehow, it's now more real....I guess I better get it published!
Posted by Rickflix at 4:18 PM 0 comments

The problem with sticking your neck out is that you can never be sure your head won't get cut off.

Though I've been involved in aspects of social media for quite a number of years (I started my first blog in 2005), I really didn't seriously “launch” myself into the universe until 2010.  I ramped up a new blog to record my impressions, started a YouTube channel to experiment in that world, began using Twitter to pull it all together, and pondered what this new world of accessible media would mean to my future. 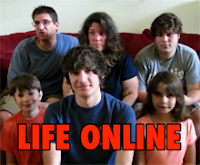 My current projects: one, an "evolution" of documentary filmmaking, and the other a genre novel offered in both e-book and tradtional editions (click on the image for the respective Facebook pages)

I've worked in aspects of visual media all of my life - I make my living as a creator of documentary, promotional and educational media. I sometimes work as an editor as well. I've won recognition, including three Emmy awards, and I sometimes have taught filmmaking workshops as well.

Creatively, though, I'm not where I want to be.

Since I began to explore social media and watching the masters at work (people like Gary Vaynerchuk and even the icons of YouTube, I've developed several hunches about "what this all means"  to me:

The key, I've come to believe, is to establish personal creative goals, and then perceive the entirety of social media as an opportunity to achieve those goals.

I also believe that many content creators don't appreciate that their talents are bigger than the platforms they use.  Many talented YouTubers see success on that site at their only option - instead of just part of a bigger picture.

My beliefs, though, have been largely theories.  Beginning last year, I began my own “grand” experiment to put those theories to work.
CLICK HERE TO CONTINUE READING>>>>>>>>>
Posted by Rickflix at 1:24 PM 5 comments

There's no question anymore about the power of social media and online video.  Revolutions have been born, causes have been promoted, products have been sold, stars have been created and dreams have been fulfilled as a direct result of social technology.

Just how to create an effective online video, however, is a an art that's largely elusive to many businesses and organizations.

The County of San Diego Department of Animal Services, however, is discovering that it's worth the time and effort to create fun, entertaining online videos - distinctly different from the typically schmaltzy tug-at-your-heartstrings videos that have so far dominated similar efforts by animal organizations.

Tiffany Shields, Supervising Animal Care Attendant with the County, teamed up with a video savvy volunteer, Greg Baldwin (who happens to be my nephew), and together they've created over twenty videos promoting not only adoptable animals, but the people and ethics of their department - and always with a broad sense of humor that makes the videos fun to watch - even if you're not intending to adopt an animal.

In this interview, I talk with Tiffany and Greg about the evolution of these videos, their impact on the community and on the department itself.

Posted by Rickflix at 6:31 PM 0 comments