This week, I continue my exploration of first words in fiction with a look at popular science fiction.

Compared to last week's look at current Young Adult bestsellers, I found this selection much more intriguing and/or thought provoking. What do you think?

Here they are, in no particular order:

Fahrenheit 451 (Ray Bradbury):
“It was a pleasure to Burn”

Dune (Frank Herbert):
“A beginning is the time for taking the most delicate care that the balances are correct.”

The Stars My Destination (Alfred Bester):
“This was a Golden Age, a time of  high adventure, rich living, and hard dying...but nobody thought so.”

2001: A Space Odyssey (Arthur C. Clarke):
“The drought had lasted now for ten million years, and the reign of the terrible lizards had long since ended.”

1984 (George Orwell):
“It was a bright cold day in April, and the clocks were striking thirteen.”

The Hitchhiker’s Guide to the Galaxy (Douglas Adams):
“Far out in the uncharted backwaters of the unfashionable end of the Western Spiral arm of the Galaxy lies a small unregarded yellow sun.”

Starship Troopers (Robert Heinlein):
“I always get the shakes before I drop.”

Next week, I'll take a look at the first words of some classic novels.
Posted by Rickflix at 11:56 AM 0 comments 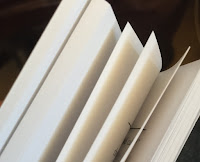 What makes a good book? A good story, of course. Engaging characters, an intriguing plot and perhaps just the right setting.

But what really brings you in? What catches your attention? Is the first line really that important?

Here's a list of the top ten New York Times Young Adult bestsellers, along with their very first opening sentences.


These are some of the most popular contemporary novels - do their first words match their reputation?

Posted by Rickflix at 3:39 PM 0 comments