"OWN THE SCRAWNY" COVER PREMIERE! 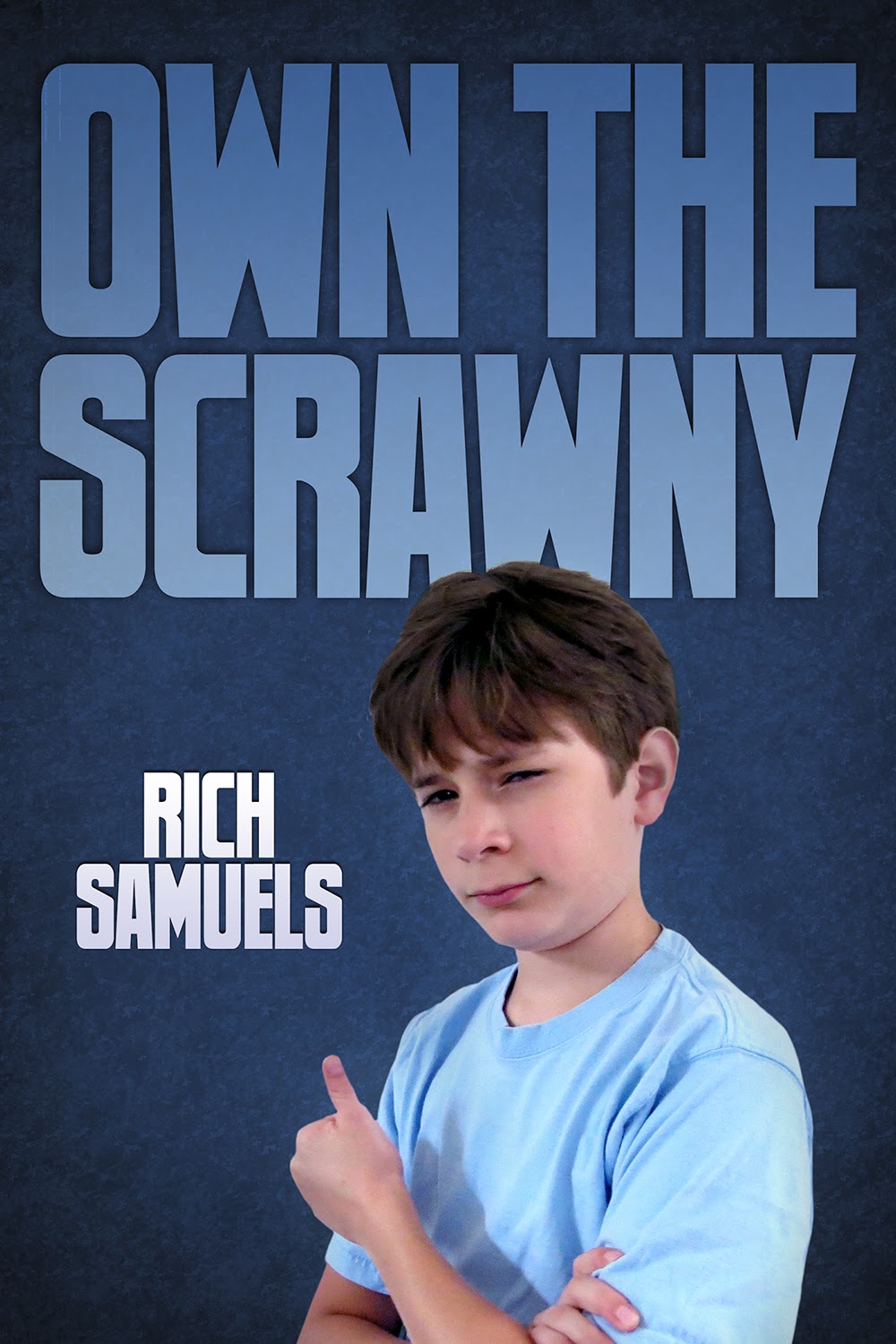 For the first time, here is the cover to my new novel!

It was bad enough embarrassing himself in front of the entire school,
but it was worse when someone recorded it,
horrible when it was posted online,
...and a disaster when it went viral.
But it’s the comments on the video that just might send Alexander over the edge...

"Own the Scrawny" is a new adventure featuring Alexander, the central character in my first novel, "My Life at the Bottom of the Food Chain." It's coming out this fall.

This cover is really a team effort. As with my last cover, Steven Novak of Novak Illustration, created this layout, and made "Scrawny" a great side-by-side partner to the first book. YouTuber DrewDudeTV (check out his channel) portrays Alexander, and his older brother, known on YouTube as Fur (check out his channel, too!) led a fantastic photo session. Thanks to all for a fantastic job.

In the coming days and weeks, expect a series of vlogs, blogs and other content as we move toward the launch of Own the Scrawny.  First up: A vlogging trip to the Santa Monica Pier!

For more info on the "My Life at the Bottom of the Food Chain" series check out your favorite online book retailer, or visit my author site.

If you'd like to keep track of my progress:

As always, thanks for your continued support!
Posted by Rickflix at 4:55 PM 0 comments

When I began writing “My Life at the Bottom of the Food Chain,” I had no desire to write in complete isolation. I This was my first novel, and I wanted to create an environment that would help me stay motived as I attempted to navigate through this entirely new territory. In short, I wanted to know I was writing something that would successfully connect with other human beings. I wasn’t looking for professional critiques, or human spell-check programs. I wanted gut reactions. It proved to be an entirely gratifying process (I wrote about it in some length in the acknowledgments in “My Life at the Bottom of the Food Chain”).

Recently, I had the opportunity to get to know writer Andrew Eckhart in a Google Hangout in a Google Plus community entitled, Authors & Bloggers Seeking Cross Promo, a community of writers seeking ways to work together to achieve their individual goals.  Andrew, who has written several science fiction ebooks, also sought a path through which to connect with his readers. He took the process several steps further than I, and presented raw chapters of a writing project in serial form on a public blog, as he was writing. Though the book would evolve further as he moved toward publication of the actual novel, he chose to share the process publicly.

In an article published a couple of years back on  the “Tuesday Serial” blog, Andrew wrote about the process of writing serial fiction, Serial fiction forces writers to focus and practice and produce...but it also allows writers to feel accomplished, acknowledged and legitimized, especially if they haven’t had the opportunity to publish before.

As I, too, felt with my tiny audience” Andrew felt a sense of obligation to maintain his output on a regular basis. Knowing that there were people out there that were waiting for his work provided the greatest incentive: Most importantly, serial fiction allows you to receive support from your readers. I promise you that whatever it is you’re writing: Supernatural Romance, Time Traveling Hijinks, a written reality television show based on the life of an amoeba that lives on the ear of a cat, you will find an audience that will enjoy your work.

He concludes that it can be stressful, hair-pullingly annoying and make one consider the pint of slow-churned cookies and cream in the freezer a viable “snack,” but it is incredibly rewarding.

In theory, I love the concept—and I hope to give it a try. In writing “Own the Scrawny,” the follow up to “Food Chain,” I had intended on repeating and slightly expanding the public side of my writing process, but soon discovered that this particular novel would be passing through quite an evolution. Sharing the process would have been, I believe, insanely frustrating for my prospective readers. The book that took shape is quite different than the book I set out writing months ago. In contrast, the original book had a fairly clear roadmap from the outset. I abandoned the sharing process after the first week.

I’m intrigued, however, with the challenge of writing serial fiction, and intend on preparing a future project with that specific approach in mind. Based on my limited experience with a hand-picked audience, the idea of creating a truly public blog and taking readers along on the adventure as it happens could be both exhilarating—and terrifying.

What writer could ask for anything less?

Posted by Rickflix at 7:45 PM 0 comments

One of the more interesting projects I’ve had the opportunity to produce over the last few months was “18 Miles,” a documentary/oral history project commissioned by a family that wished to preserve the story of their elderly patriarch for future generations. His daughter, Donna Weldon, turned to my colleague, Alexandra Nichols, and together we developed a concept which I hope we can replicate for other families.

"18 Miles" is the story of soldier Joseph Lincoln and his hometown sweetheart, Ruth Williams. Married for 54 years, this is the story of how they found in their lives together a union of hearts and minds.

Through interviews with Mr. Lincoln (Ruth had passed away a year before), their children and friends, along with selected historical re-enactments, we tell the dramatic story of how Joe and Ruth met and then married in the early 1950’s. As Ruth was preparing for the wedding, Joe was at an army base, in training to earn his wings (and increased pay) as a paratrooper. His final jump was repeatedly delayed due to weather, as the wedding date drew ever closer. He achieved his final jump just in time, but he still had to make it home. A regional air force base offered a ride home – but his journey to that base would require a hike through backwoods in the deep south. As an African-American man in the 1950’s, he knew the very real dangers he might face.


This wasn’t a project created for television, cable or even online – it was created for the specific purpose of keeping family history alive. As Alexandra explains, her own heritage as an African American "requires me to honor the patriarchs and matriarchs in our communities by listening and learning from their wisdom."  Too often, family histories are lost after a generation or two. Even Oral histories—extended interviews with individual family members about their lives—don’t necessarily provide a sense of the true spirit of an individual’s life in a form that future generations can easily access and appreciate.

“18 Miles,” like any good documentary, told a story. With the help of Joe and his family, we focused on selected events in the lives of Joe and Ruth that paid tribute to their lives and their marriage, and preserved in a very real sense the spirit of who they were as a couple and a family.


“18 Miles” wasn’t just a successful project, it also brought the family together. Actors in the stylistic re-enactments included his children and grandchildren. Donna offered a rich selection of family photographs and documents that helped bring the tale to life. With the help of cinematographer Peter Bonilla, we were able to create a program created for a family that had the look and feel of a broadcast production.

Alexandra and I believe that “18 Miles” provides an exciting model for families to pay tribute to and immortalize their own history. Future generations won’t simply know their family history—they’ll feel it.