If Only the Rest of My Life Was Like This

As a volunteer, I’ve led video production workshops in a variety of settings and for ages ranging from teenagers to the elderly. One workshop, however, was especially meaningful.

At a chance meeting with the development director of Pacific Lodge Boys Home (Now Pacific Lodge Youth Services), a youth home dating back to the 1920's.  I mentioned that I’d conducted filmmaking workshops in the past. I was asked if I’d consider a similar workshop at Pacific Lodge.

I admit some reluctance at first. These were kids fresh out of juvenile hall, with backgrounds that were difficult if sometimes brutal. However, they’re also kids that the courts felt still had the chance to change their lives in a positive direction. By sending them to Pacific Lodge, a bucolic wooded setting where there were no walls or guards, they’re given the chance to work with counselors and therapists to set things right.

At first glance, you wouldn’t think I would have had anything in common with the boys. I was never in trouble as a teen, much less had been anywhere close to juvenile hall. My family life wouldn't have been called “dysfunctional.” On the other hand, previous experience in working with teens had taught me that showing respect and belief in their abilities went a long way in creating a positive experience. I decided to give it a try. 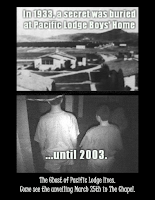 In late 2003, I began a six-month video production workshop with a group of eight boys. With the help of a great staff and a well-respected counselor with whom I worked hand-in-hand, I visited Pacific Lodge twice a week as the kids wrote, shot and then edited a half-hour film, “The Ghost of Pacific Lodge.” Together, we built a mythology inspired by PL's long history, crafting a ghost story that begins with the discovery of mysterious diary hidden in one of PL's spooky basements. Each boy participated in every stage of the production. Each had the chance to be a camera person, an audio boom operator, a special effects wizard, a director, and an actor.

It was challenging at first. For kids emerging from their first stay at juvenile hall, self-esteem is nearly non-existent. Despite their bravado, many of the boys were terrified. Some wouldn’t hold the camera at first. Others couldn’t imagine taking the lead as director.

I'll never forget the moment when a fourteen-year-old boy turned to me and asked, “Why do you waste time with us? We’re all losers.” I shrugged and made a point of making the answer seem obvious, “If I thought you were losers, I wouldn’t waste my time.”

Trust is extraordinarily powerful. Once I established that I was for real—by simply paying them the respect of showing up as promised every week—they became more willing to take part.

Once the film was completed, the administration of PL held a grand premiere. Staff and benefactors cheered the boys as they emerged from a limousine and walked down the red carpet (after a five-star dinner at a nearby restaurant—personally paid for by the Director of PL). I had the great honor of not only telling the audience what these boys had accomplished, but thanking the boys individually and presenting them with mini-Oscars.

Not every boy made it through to the end. Some were sent back to juvenile hall, or worse.

Most boys, however, made it to the finish line...

...including the one boy who had been convinced he was a loser.