Backstories, for those unfamiliar with the term, are the histories of individual characters - the life stories that made them who they are "today," but aren't necessarily included in the finished novel. A number of the supporting characters in my Alexander books have fairly dark backstories.

Backstories exist so that the writer can  understand and develop believable character motivation. Hemingway called it the Iceberg Theory: The dignity of movement of an ice-berg is due to only one-eighth of it being above water. If the writer does his job well enough, he said, the reader will have a feeling of those things as strongly as though the writer had stated them.

Even though my books are humorous in nature, the stories behind certain characters are serious.

I've hinted at some: Colin, introduced in Own the Scrawny, is a new student at Alexander's school; though we never quite learn the details, we know that bullying at his old school created the troubled boy Alexander meets in the school library, and in fact drove him to switch schools. We (and Alexander) learn a bit more of his past in My Epic Life, but only enough to gain a hint of the gravity of the situation, and motivate important action in the novel.

Alexander's good friend, Darrell, is in a wheelchair. The reader learns only the most general outline of the accident that put him there: Darrell was struck by a drunk driver. Of all the backstories, his is probably one of the most developed. I know, fairly extensively, how the accident happened, what became of the driver, and Darrell's struggle to survive in the months after. I'm also familiar with his lingering anger about the accident.

In the novels, Darrell is Alexander's voice of reason. While Alexander's other friends tolerate his eccentricities, Darrell confronts him. He's a loyal friend, but he directly challenges Alexander when his behavior seems immature. Darrell's more adult view of the world isn't surprising, given the trauma he's experienced.

If all of this seems pretty heavy for these books, remember that there's a close relationship between comedy and tragedy. Tending to that relationship, and thinking of characters as real people with histories, is the difference between a story that just makes people laugh, and one that also makes them care.

Fear Can Make You Smile

Every book festival I've attended is a learning experience. This year, with a trilogy of "Alexander" books in the offing, I've made a point of attending as many public events as I can. With the exception of a few very local events, it's not something I've done before, so I'm still learning the ropes: I'm looking for the right physical and verbal presentation.

Last weekend, at the Palmdale Book Festival, I tried a new pitch: I asked visitors to recall their anxiety at starting a new school, joining a new group or, really stepping into unknown territory for the very first time. Usually, that initial anxiety disappears as the unknown becomes the familiar.

In My Life at the Bottom of the Food Chain Alexander holds on to that initial fear. Even though he has friends, and his world around him seems generally non-threatening, he still believes that the Unknown is still out there, right around the next corner, and he'd better live his life accordingly.

Whether I was describing the story to a teenager or adult, the idea of Alexander's unfounded fears produced the same reaction: a broad smile of recognition.

We've all been there. At one time or another, we've all spent precious energy dreading and fearing what lies just ahead, only to discover that it wasn't so bad after all.

I think that's part of the reason Alexander's fun to root for - the reader can see what Alexander can't: everything's going to be okay.
Posted by Unknown at 10:00 AM 0 comments

Fear, Bullying and My Books 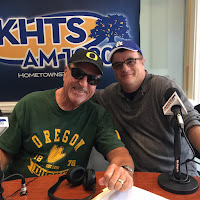 Local radio here in the Santa Clarita Valley has proved to be a nice jumping-off point as I launch the third of my "Alexander Adventure" books. Coach Ron Tunick has had me on twice on his Business of Life program. On the first program, we discussed my book series, but on the second, we talked about bullying, one of the critical themes across all three books.

For the most part, Alexander isn't a bullied kid; but he is a kid who lives his life in constant fear that he'll be humiliated, pranked or otherwise assaulted by his classmates. His fears control his life, providing the basis for a great deal of the humor in his story, but also underlining the reality that fear alone can control your life. In My Life at the Bottom of the Food Chain, Alexander discovers–almost too late–that in his suspicion and mistrust of his classmates, he's become a bully. 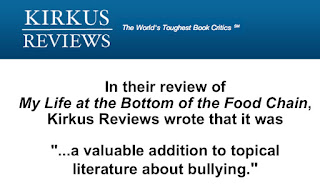 Coach Tunick and I discussed my thoughts on bullying and the idea that Alexander's skewed perception of the world around him is his greatest challenge.  I hope these three books show how Alexander meets that challenge and becomes a better person for it.  At the beginning of the first book,  Alexander is a scared, self-centered little boy. By the end of the third book, he's more confident and compassionate. I've tried to craft a relatable story about growing up.

Using Alexander's story as a platform to talk about bullying issues has been one of my objectives for quite a long time. My special thanks to Coach Ron Tunick for helping me launch this effort.

You can listen to my discussion with Coach Ron Tunick here.

Media inquiries: press@rlsventures.com
Posted by Unknown at 11:00 AM 0 comments