Diving Into the Media Abyss 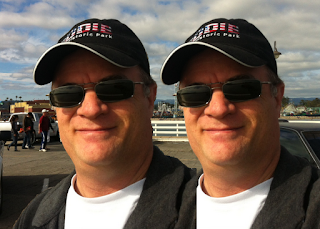 I've been living a double life.

I work in "traditional" media, producing documentaries, promotional, informational and educational videos.  I've done okay, received some recognition (including three Emmy Awards), and seem to be emerging through the economic downturn.

Over the last couple of years, however, I've made a concerted effort to shift my efforts, my career - and my future, toward digital media.

What does that mean, anyway?

For many, it simply indicates another platform to push traditional media out to audiences that are increasingly moving away from the traditional television model: movies or television shows ported to other platforms, from Netflix to YouTube, Hulu, and a hundred other variations.

That's part of it, of course.

For others, Digital Media means the creation of web series - often, this reflects the interpretation of traditional media for the new environment (for example, informational, documentary, news, drama or comedy series) in a shorter, online friendly length.

The old buzz-word "interactivity" has risen to an art form on YouTube, where content creators - those who maintain their YouTube channels and post videos on a regular basis - understand that the greatest tools to building and maintaining an audience is interacting and responding to their audience.   They reply to commenters on their videos, comment on other people's videos, ask their viewers for feedback and opinions, and create ongoing opportunities beyond their YouTube base to further engage their followers.  They're all about promotion and development through interaction.   Anti-social artists need not apply.

Can Old and New Media Work Together?

Over the last several years, I've made a concerted effort to understand the relationship between traditional and emerging media platforms.  This year, those efforts are beginning to coalesce into concrete action.

The National Association of Broadcasters show- a conference featuring the largest exhibition of professional broadcast technology in the world - clearly provided a peek in to the dawning of high quality, cheaper and simpler to use product.  The GoPro booth was likely one of the most popular and enthusiastic destinations in the sprawling complex. Though GoPro is a specialized product, it's real a harbinger of much more to come across the industry.

I hadn't been to WestDoc before - but as I move closer to some major new initiatives in my career, the time was right to return to the heart of what I've been doing my entire professional life, and begin the process of bringing these old and new elements together.

The slogan for this year's Westdoc was An Industry is Being Reborn, reflecting a recognition that the world of nonfiction media production and distribution is inexorably changing.   NAB, too, reflected this awareness at it's April conference with it's own theme,  The Great Content Shift.  VidCon, however, emerging from the very world the rest of the media world is trying to understand, didn't need such to signal it's attendees that the world is changing - they know.

WestDoc featured an array of seminars and informational sessions featuring many of the networks interested in documentary and reality content (History Channel, Food Channel, Lifetime and Discovery Channel, to name a few). Even YouTube was there, reflecting the site's current interest in developing and producing professional channel content.

Current trends were explored as well, including crowd-funding, Online Retailers for video content (such as Amazon.com, on which I've made my documentary "Bollywood Steps" available), and a day-long "PitchFest," providing documentarians and reality TV creators a high-profile platform to push their concepts out to potential funders and networks.

With an industry being "reborn," and "content shifting" online, I've been intrigued by the great abyss that still exists between traditional media professionals - who perceive YouTube and similar sites as simple platforms for traditional, one-sided non-interactive content - and the pioneer content creators who make up for their occasional lack of professional production skills with innovative audience engagement strategies.

Many media professionals perceive online content creators as rank amateurs.  Online Content Creators, on the other hand, don't often see themselves as filmmakers, though they follow in the footsteps of the motion picture pioneers of the late 19th Century, who sought to find strategies for making the most of the new technology.

Traditional media producers are, generally speaking, experts in storytelling and creating production value, while Intimate Audience Engagement is largely the domain of the modern content creator.

Imagine a meeting of the minds, bringing together these disparate worlds to learn from each other, and making both worlds stronger, engaging wider audiences - and creating a more financially sustainable industry for all concerned.

In my next blog, I'll explore how I'm approaching my upcoming work with a eye toward both worlds.